To the Co-Chairs and Members of the DNC Rules and Bylaws Committee:

By this letter, the Nevada State Democratic Party (“NSDP”) hereby lodges a formal complaint regarding the conduct of supporters of Senator Bernie Sanders at the recent State Convention held in Las Vegas, Nevada on Saturday, May 14, 2016, as well as the conduct of representatives of Senator Sanders’ presidential campaign (the “Sanders Campaign”).

We believe, unfortunately, that the tactics and behavior on display here in Nevada are harbingers of things to come as Democrats gather in Philadelphia in July for our National Convention. We write to alert you to what we perceive as the Sander Campaign’s penchant for extra-parliamentary behavior—indeed, actual violence—in place of democratic conduct in a convention setting, and furthermore what we can only describe as their encouragement of, and complicity in, a very dangerous atmosphere that ended in chaos and physical threats to fellow Democrats. Indeed, the threats to the Chair of the Nevada State Democratic Party are ongoing at time of this writing, as Sanders activists have posted her cell phone and home address online, and have bombarded her with threats to her life and the safety of her family. We have attached some examples of this conduct, which is not merely offensive but obviously criminal in nature. We can provide audio of threatening phone calls made directly to the Chair, which now number in the hundreds.

The explosive situation arose in large part because a portion of the community of Sanders delegates arrived at the Nevada Democratic State Convention believing itself to be a vanguard intent upon sparking a street-fight rather than attending an orderly political party process. Surprised and outraged at the idea of being out-organized and thus outnumbered in the convention hall by Clinton delegates, a portion of the Sanders delegation rushed the dais immediately upon the opening of the convention and halted the progress of any convention business for much of the day. Indeed, every point during which Sanders delegates did not agree with any aspect of the proceedings saw them press up against the dais and scream obscenities and threats at the Chair, First Vice Chair, and any other speaker. In fact, event security provided by the Paris Las Vegas Hotel & Casino took it upon themselves to increase the security perimeter around the dais so the convention could simply move forward with its routine business in relative safety. In other words, the hour-to-hour business of Nevada Democrats was necessarily conducted in an atmosphere of impending eruption of physical threats and intimidation for more than 12 hours. Scuffles, screams from bullhorns, and profane insults marked nearly the entirety of the event. Numerous medical emergencies among delegates pressed up against the dais had to be attended to throughout the day.

To the great embarrassment and revulsion of the vast majority of attendees, Sanders delegates crowded the dais and shouted down universally-respected U.S. Senator Barbara Boxer of California, who had arrived as a guest of the party to deliver a keynote address in support of former Secretary of State Hillary Clinton.

The Sanders Campaign spent its time either ignoring or profiting from the chaos it did much to create and nothing to diminish or mitigate. It was clear to the NSDP that part of the approach by the Sanders Campaign was to employ these easily-incensed delegates as shock troops to sway the convention proceedings. At the very least, these delegates became a way for the Sanders Campaign to seek the advantage of disruption at any particular moment while trying to disavow any responsibility for their actions even as it was ongoing. At no time did any Sanders representative make anything more than token gestures towards peace in the hall, and at the times of most intense crisis offered little more than shrugs and smirks.

The most egregious instance of the Sanders Campaign inciting disruption—and yes, violence—came as the State Convention’s Credentials Committee completed its work.  Adam Gillette, part of National Delegate Operations Team for the official Sanders Campaign, drafted and arranged for a member of that committee to attempt to deliver an incendiary, inaccurate, and wholly unauthorized “minority report” charging that the Credentials Committee had fraudulently denied 64 Sanders delegates their eligibility. The final delegate count had provided the Clinton Campaign with a 33 delegate advantage in the hall; one can imagine the rage occasioned by this inflammatory charge, tossed into the tinderbox of a tense convention hall. Not only did this discredit the work of the Credentials Committee—which featured five Sanders delegates and five Clinton delegates and a Sanders co-chair, and who worked all day under extremely trying conditions to be fair and diligent in their duties—it called into question the entirety of the proceedings because it indicated to an irrational minority that the proceedings had been rigged against them. Forcing their way onto the dais to deliver this paranoid fantasy of fraud and delegate theft was clearly intended to throw the proceedings into disarray. It succeeded. From that moment on, there was little hope for any peace or mutual understanding and respect between Sanders delegates and the NSDP; the mantra became simply that the convention had been stolen from the Sanders Campaign.

Never mind that six of the 64 potential Sanders delegates referenced had been seated after investigation, or that most of the remaining 58 potential delegates had been disqualified—appropriately, and by a panel evenly split between the campaigns—for not being registered Democratic voters in Nevada. Never mind that the same Credentials Committee had disqualified Clinton delegates for various reasons as well. Never mind, further, that just eight of those 64 potential Sanders delegates even attempted to register for the State Convention. All that mattered was the creation of a narrative of fraud and dispossession, which the Sanders Campaign fomented intentionally for its own political gain. This was an unconscionable act by an official Sanders Campaign representative, with full knowledge of its likely impact on the convention.

Alerted by event security at approximately 10 p.m. that the situation had reached a point where public safety could no longer be assured and that the proceedings had to be concluded in very short order, the NSDP worked diligently to conclude the business of the day and adjourn the State Convention as quickly as possible.

On Sunday, May 15, 2016, a group of Sanders activists attended “protests” at the NSDP’s headquarters office in Las Vegas to criminally deface the building with graffiti. Las Vegas police were notified and called to the scene.

The people who fostered, encouraged, and gained from the unsettling scenes at the Nevada State Democratic Convention bring dishonor and discredit to our state and national parties. Having seen up close the lack of conscience or concern for the ramifications of their actions—indeed, the glee with which they engaged in such destructive behavior—we expect similar tactics at the National Convention in July. We therefore formally complain to the DNC regarding these unfortunate events, and warn the body that the goal of many of these individuals, sanctioned or encouraged by the Sanders Campaign, is not party-building but something more sinister and unproductive. Their tactics speak for themselves, and have no place in our political process as Democrats.

Thank you very much for your attention to this matter.

Examples of some of the thousands of crude, threatening text messages and voicemails from Sanders Campaign supporters against the Nevada State Democratic Party Chair can be found here: https://goo.gl/QpHNc5 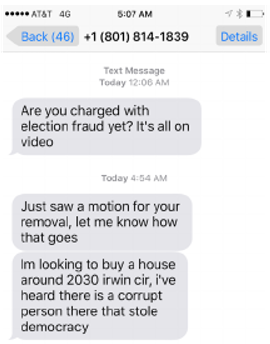 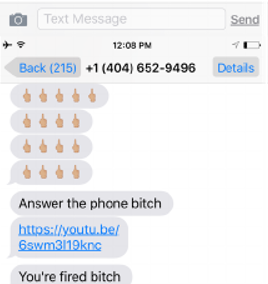 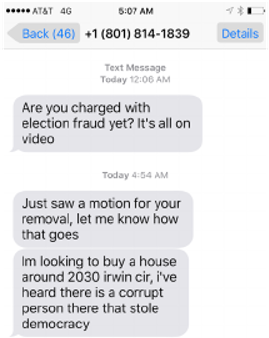 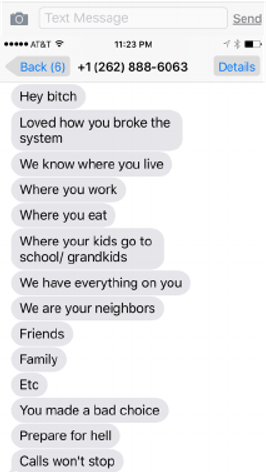 Make a commitment to vote this election. Let's take back the Congress and retain the White House to ensure our nation moves forward ... not backward!November 8th, 2016